During the weekend I attended Radio 1's Big Weekend (my first & definitely not last music festival!). I got to see some of my favourite bands and artists perform live (some of the best including; The Script, The Vaccines, Macklemore and Ryan Lewis, Bastille, Alt-J, Jake Bugg, Bruno Mars & much more) as well as some of the Radio 1 DJs (Grimmy, Zane Lowe & Jameela Jamil). The venue was fantastic (and not as a big as it appeared on TV, but shhh! - that's between you and me!). I was lucky enough to get tickets for Saturday and Sunday (I was super surprised as so many people didn't even get tickets for 1 day!) which meant feeling a little groggy and tired on Sunday, but that didn't stop me from having a good an amazing time! 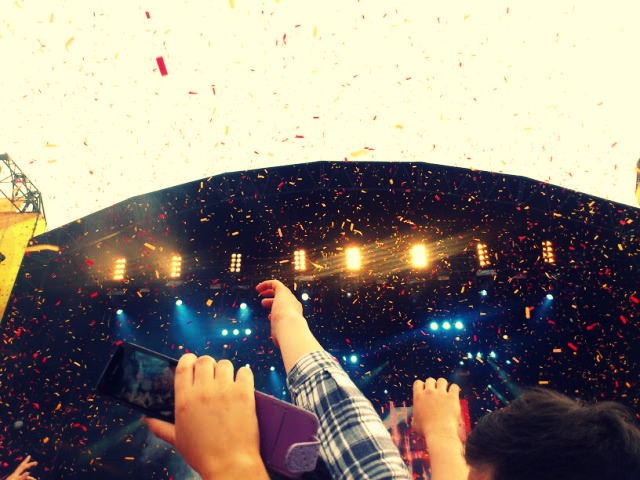 Everyone was so friendly and considerate ( I mean they even apologized if they elbowed you slightly whilst dancing! Seriously!) and the vibe was so chilled - perfect! It did rain and when I say it rained, I mean it poured and I was literally drenched! I also (stupidly) didn't take a rain jacket so I guess I was asking for it... Before The Script came on was the worst, as well as my hair being soaked, my 'not-so-waterproof' coat  was saturated with rain water (but ahh well!) I battled on shivering and cold anyway What could I do?! I did eventually lose all hope of the rain disappearing and bought a very ugly rain poncho but almost as soon as I handed over the money, the rain stopped and did not return (I felt like I was in 'Just My Luck'!)! 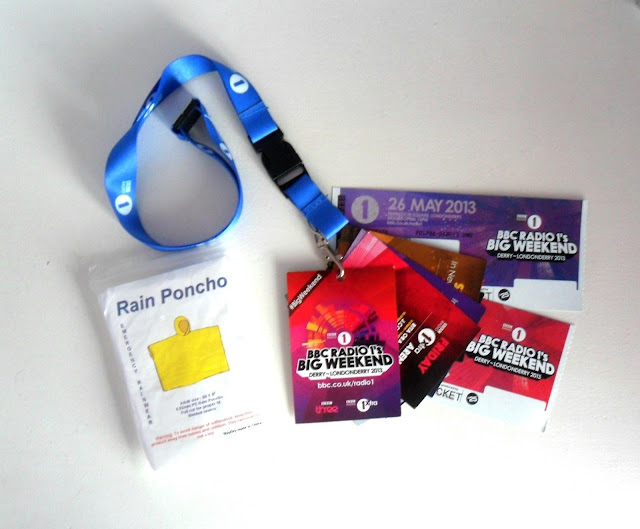 Pictured above is the 'Rain Poncho' I never got to wear, the festival programme on a lanyard & tickets!

Outfit-wise, On Saturday I thought I'd keep it comfortable wearing black jeggings from H&M, an oversized tee from eBay and a camouflage style shirt from Newlook paired with gold rings and earrings featured in this post and brown brogue boots. It was light and kept me warm (thankfully, as it got quite cold)!

On Saturday I saw The Saturdays (no wayyy???) first, then Kodaline (they were really good!), Conor Maynard, The 1975,  some of Ellie Goulding's set (not much though), The Vaccines (the highlight of Saturday in my opinion), Alt-J (another favourite of the day!) & Biffy Clyro. 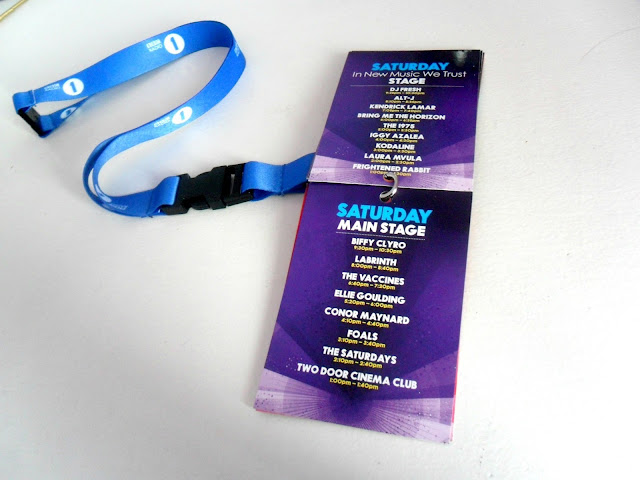 On Sunday I wore a pair of skinny jeans from Next, a peter pan collared lace top from Internacionale, and a khaki utility jacket from Newlook paired with my brown brogue boots (nice use of alliteration there!).

I also saw Thirty Seconds To Mars' last song (we ran a little late), Little Mix, Wretch 32, Macklemore & Ryan Lewis (they were amazing!!), Olly Murs ( he was great too!!), The Script (highlight of the day I thought), Bastille ( just wow!), Paramore & Bruno Mars ( I honestly didn't expect him to be as brilliant as he was! He ended the night wonderfully!). 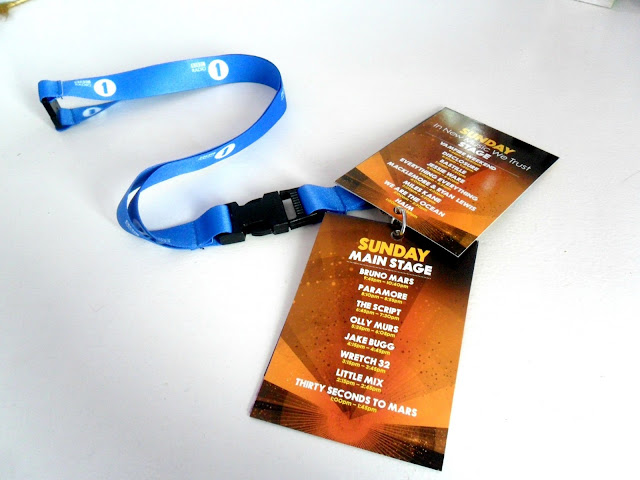 If you were living in a hole last weekend and managed to miss some of the clips (it was literally being covered everywhere!) you can click here to see some of the best performances and pictures from the festival!


Have you ever been to a music festival? 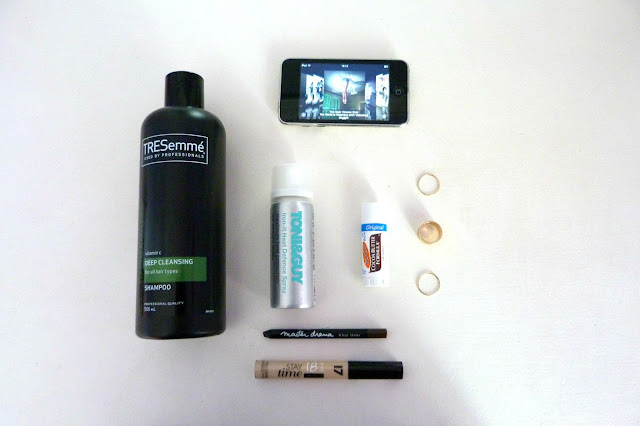 I've been bogged down with a flu recently and today, I built up the energy to switch on the laptop and get the camera out to do a little favourites post (woo). It's pretty cloudy outside so the lighting wasn't great for the photo - but I mean, at  least there's something there to visualise!

So, I'll begin with the TRESemmé Cleanse & Replenish Deep Cleansing Shampoo. I'm one of those people who feel the need to wash their hair nightly (this isn't exactly the best thing to do... I know) but I hate having to use dry shampoo or talcum powder as I feel it weighs my hair down and adds another element to my morning routine, ugh. This shampoo smells sooo good and lathers really well, it contains vitamin C and leaves my hair feeling silky soft and free from product build-up.

Next up is the 'Toni&Guy Iron-It Heat Defense Spray'. As well as washing my hair daily, I also blow dry and straighten my hair. This heat protectant by Toni & Guy smells really good (it has a musky scent to it) and is quite small which makes it perfect for travelling or for just saving space in your room! It also does a fine job of keeping my hair straight all day and it didn't cost me all that much!

'Palmer's Cocoa Butter Formula Lip balm' is also a favourite. It keeps your lips moist all day as the formula is quite oily (so I'd avoid this product is you don't like shiny lips or if that kind of thing irritates you). The first thing I noticed was the smell - It is amazing (everything I've mentioned seems to have a really good smell!) it smells well...cocoa-y, that shouldn't come as such a surprise as it is called the 'Cocoa Butter Formula'. Also, the packaging is pretty cool - it's not shaped like your average lip balm, it's quite flat and oval shaped making the application easier!

If you read my H&M post here you'll know that I purchased a pack of gold rings. I'm not really one for wearing rings, but I must say I absolutely love these - they're so simple and go with literally anything. So, I can wear these with whatever, whenever as they are not too dressy for the day or too casual for the night! (result!)

I bought the Maybelline Master Drama Kohl Eyeliner in Brown a couple of months ago and have used it everyday since! It's so soft (almost like a gel) and so I find that it is best applied using a brush... Its perfect for drawing a cat-eye effect and lasts all day long - so no topping up needed! The colour is also pretty strong so it doesn't take long to build it up to the strength you like, making this perfect for if you're in a rush or lazy ( like me!).

This next product featured in my boots haul post here. It's the 'Staytime Concealer' by Seventeen. I honestly didn't have high hopes for this product, it was cheap and I guess I expected the price to be reflected in the quality(in other words I expected it to be crap!). However, my judgements were so wrong and this product is literally a lifesaver. I got it in the shade 'Extra Fair' and it is an exact match to my skin tone - meaning i don't have to bother with all the fuss and blending of foundation! It's full coverage so a little goes a long way and it lasts all day! Brilliant!

Last but not least is Two Door Cinema Club's album 'Beacon'. I was reluctant to buy this album at first as I loved 'Tourist History' so much! I was scared of being disappointed as I didn't think their next album could get any better (surely they couldn't top their first, could they?). But recently I bought tickets to go to a music festival at the end of the month & it turns out they'll be playing, so I bought it and ...boy, was I wrong (again)! The album is amazing, I've practically had it on repeat everyday while I revise for my exams... so if you liked the first album and haven't bought 'Beacon' already I highly recommend you do ( and soon!).

Benefit | How To Look The Best At Everything 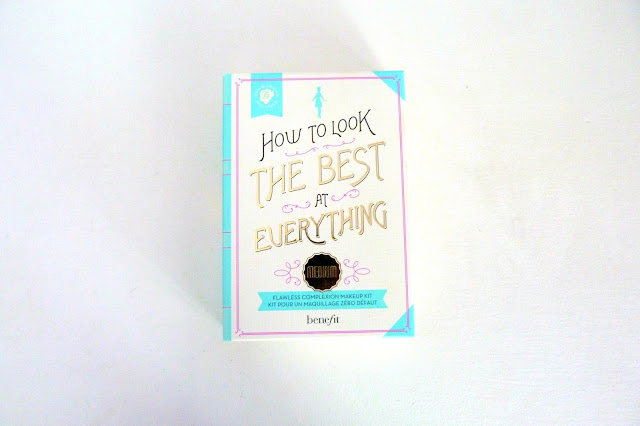 I've had this little makeup kit lying around in my room for quite a while. It's the 'How To Look The Best At Everything' set by Benefit and I must say the packaging is so cute (it looks like a little book!)!  As you can probably see, the set is in 'Medium' which is bad news if you are a pasty white chick like myself but perfect for those blessed with sun kissed skin (or those who like to opt for the orange face, white neck look). The set includes sample sizes of;

The POREfessional (7.5ml) - I must say, this is my favourite product ever!
'Hello Flawless Oxygen WOW' Brightening makeup (7ml) in 'I'm so money' honey
'Boi-ing' Industrial strength concealer in 02 & 03
'Hello Flawless!' powder cover up in 'I'm cute as a bunny' honey
Plus, you get a little brush! 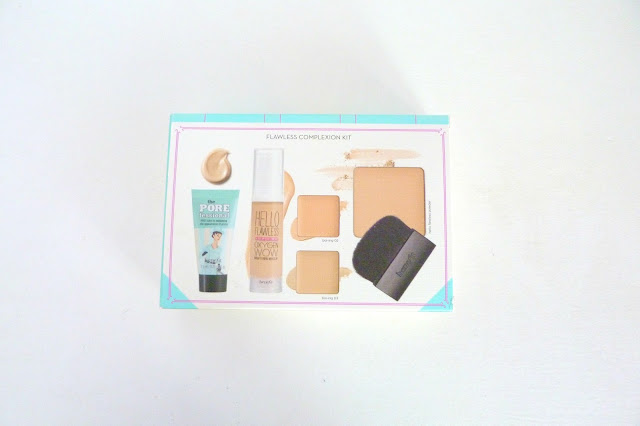 On top of the cute packaging and amazing products, the kit includes a 'Tips & Tricks' booklet attached! It gives tips on applying concealer, foundation and powder making it fool-proof! 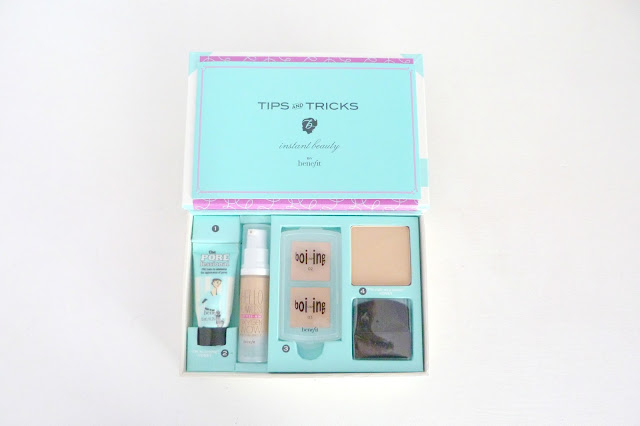 I haven't used much of the foundation or concealer as the shades are too dark and they appear orange on my skin (which is never a good thing) but the application is smooth and the quality is brilliant! I would definitely purchase a full bottle of the foundation in a lighter shade as well as lighter shades in the concealer as both products live up to the hype! I am also planning on repurchasing 'The POREfessional' as it is sooo good and keeps my makeup on all day! (result!) 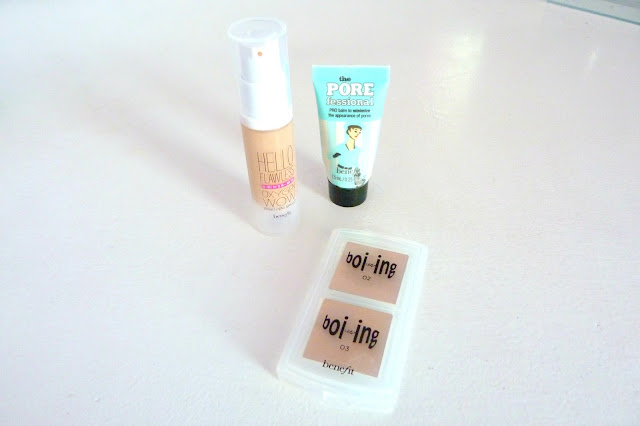 Have you got a favourite Benefit product?
Posted by Rachael at 09:46 8 comments:

Yesterday morning I popped into Specsavers to grab some contact lenses (because yes, I am blind as a bat!).  I received H&M's new 'Summer Season' catalogue (with Beyoncé on the cover!!) in the post earlier that morning and so wanted to go for a little browse on my way out to see what they had in store. As I am lucky enough to be going to a music festival later in the month I wanted to buy some jewellery to go with my outfit. And so I did! I ended up making the very tough decision to buy earrings and a pack of rings (I was also going to buy a gold chain but came to the conclusion that I would never wear it). 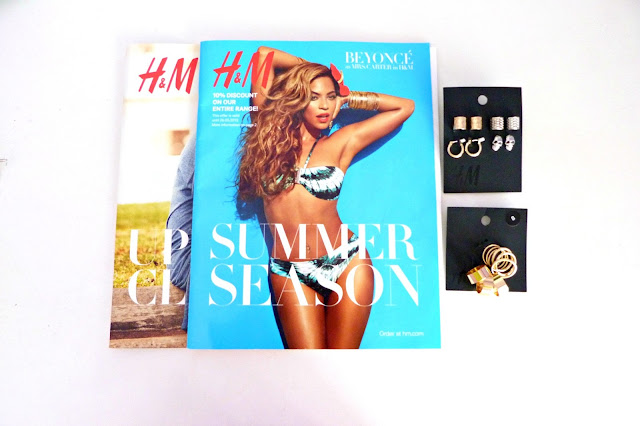 I bought a set of 9 rings - I don't have many rings and these were only £3.99 so I thought Why Not? I love how they vary in size and because they are plain they will go with practically anything! I also purchased a pack of earrings and ear cuffs - I have developed a slight love for hooped earrings recently (I don't know why) as well as earcuffs as I feel they give an edgy element to any look and are pretty much effortless to put on (no fiddly earring backs... result!). These cost me £4.99 which I guess isn't bad considering they are good quality and don't look like they are going to break or snap anytime soon! 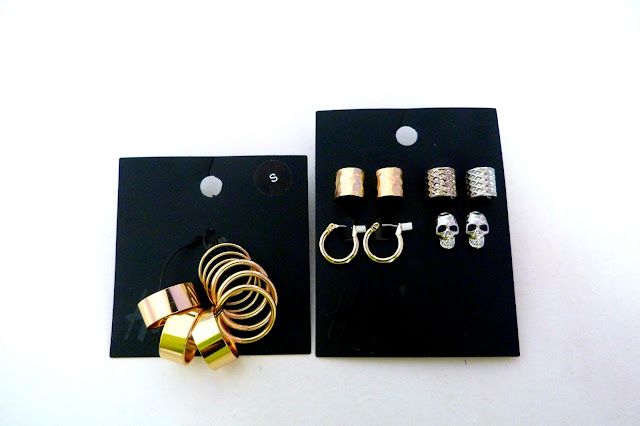 A quick side note for any fashion lovers... the H&M Life page on the H&M website is amazing for seeing any new trends or updates from your favourite style icons. Plus, it's updated daily to keep you right up to date on everything going on! 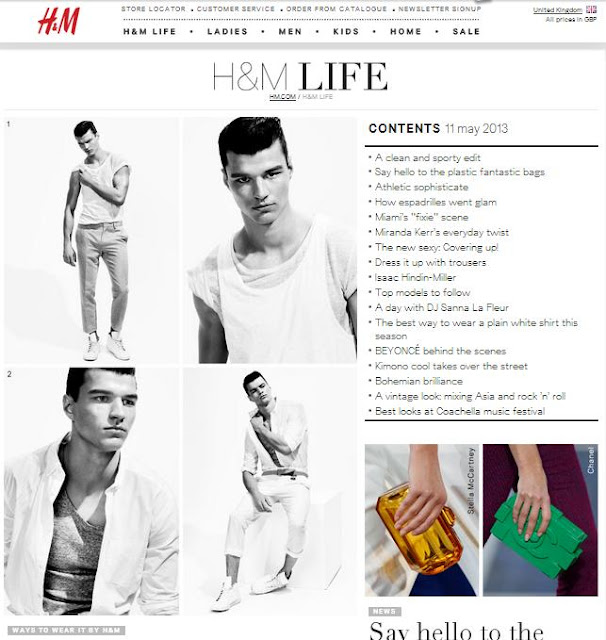 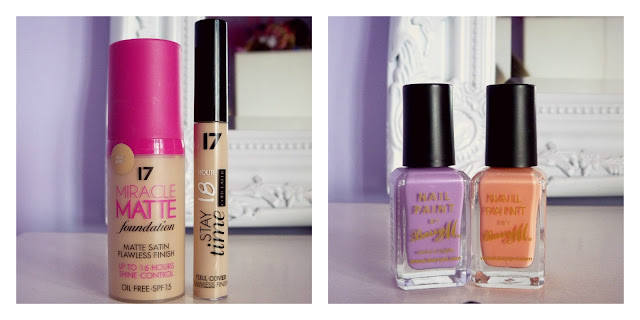 Today I went on a little trip to boots. I had a list of things I wanted to buy in my head but I was distracted by the glowing cosmetics section (as always). As I am constantly on the lookout for good 'fair' coloured foundations, I had a peek at some of the brands I normally don't bother with.  I found this 'Miracle Matte Foundation' in the shade soft ivory, it was priced at £5.99 and so I thought 'Hey! Why not?'. I also just ran out of my Revlon PhotoReady Concealer but couldn't find it anywhere in Boots so I thought I'd pick up this 'Stay Time' Concealer as a slightly cheaper alternative and give it a go! I also bought my first Barry M nail polish today (woop woop)... I decided to grab 'Ice Cream Purple' and 'Peach Melba' as I don't usually wear bright nail polish and thought that it would be a nice change for the spring.

Rachael
Hello! I'm a blogger who loves music, photography, fashion and beauty. Feel free have a little look around & don't be afraid to comment.